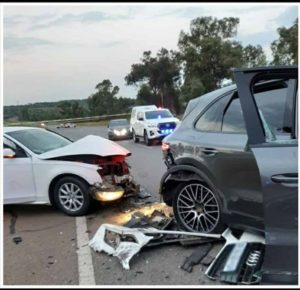 Received a urgent call to secure a Crime scene, R101 near One Military Hospital, direction Centurion .

ML1 responded and arrived with
DV1 and UV 71
We secured the scene by diverting traffic away from crime scene.
Awaited all the necessary services including SAPS, Forensic, Pathology Ext.
Conclusion:
Prominent businessman from Pretoria West driving a Porsche Cayenne was smashed into behind by a white Audi. One of the perpetrators smashed his side window with a hammer and was shot by the businessman in the head. The rest of the crew got away in a double cab Bakkie.
One perpetrator died on scene.
Businessman, no injuries.
We were able to stand down at 00:10.

Thank you to everyone that assisted.