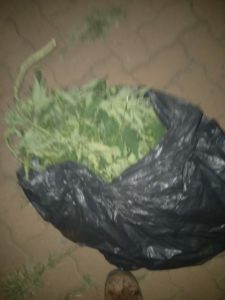 Suspects with dagga plants
Date: 03:15. 14 March 2021
Area: Boksburg North (East rand)
Involved: BN CPF S1 WR06
NCA IP04 (also Cpf)EAST RAND
SAPS BN.
During our early morning patrol IP04 and WR06 spotted 2 suspects walking down Trichardt rd, Beyers park, Boksburg North.
Stopping next to them asking them were they are going we spotted the rubbish bag they are carrying, looks like garden rubbish.
On further investigation we find out the bag is full of dagga plants. They were on there way to a known drug house in impala park.
SAPS was contacted and arrived on scene. Both suspects were loaded in SAPS vechile and taken to station for further investigation.